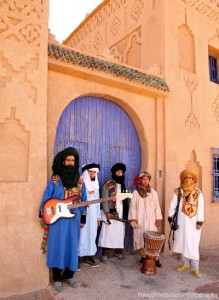 IMODDA is a Berber music band from the Moroccan Sahara, which has planned the recording of their 2nd album in Portugal, second quarter of 2014.  For some reason, the visa application was refused, so, they are trying to get a studio in desert.

The name of the album is “Tislet”, which means the “Bride”, in Berber.  The album gives thanks to the Berber women all over North Africa, for their resistance, protection of our oral culture, language, and our identity.   It is thanks to women that the memories of the Berber people have been transmitted from generation to generation, for thousands of years.  The Berber identity is expressed through our tales, songs, and artisanal clothing (which has extraordinary embroidery details especially during the weddings).

Imodda’s sound is placed in the musical sub-genre of Desert Blues, they called it “Azur”. The group uses electric guitars and djembes for fusion between traditional and modern sounds.   Their songs are sung in Tamazight (Berber) with the aim of try to preserve the identity and language of Berbers in North Africa.

The band is comprised of five musicians.  And although young, the members of Imodda have been playing instruments professionally since they were kids.

Have a curious history and life, inhabited the desert while nomads to adolescence and found in music their best form of expression, now all living in the village of Merzouga ,Southeast of Morocco .

They recorded their first album in Morocco , with limited means and come to Portugal this year (in partnership with the Escola de Artes de Sines), try to reverse these conditions for recording the second album and preparing their path to internationalization .

Escola de Artes de Sines is an integrated project within an association , open to the entire community and its main objective the teaching and learning of Music, Theatre, Dance, Visual Arts and other art activities. The Music Department of the Escola de Artes is engaged in the specialized teaching, learning, promotion and dissemination of music and is currently teaching institute for higher education offer of the Alentejo and Algarve.

The partnership with Imodda falls within the  International Projects developed by the school.