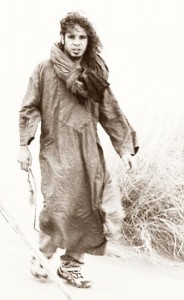 In a vast desert, with too much silence, they needed to create some appropriate sounds that would fill and adjust to this silence, that’s what gave birth to IMODDA music.

All the members of IMODDA were born in the southeast desert of Morocco. They spent their childhood in the Sahara, living a nomadic lifestyle. Since childhood they loved music, they gather around the fire under the moon light to play the drums and flute, singing the traditional songs and poems passed down to them by their ancestors, those kids habit attracted the nomadic families who called them Tiziri -which means moon light-. Tiziri became known by animating the local celebrations including the wedding ceremonies, baby births….
Since the early 1990s, the nomadic families had to give up their lifestyle, trade their herds after a harsh 60 years of drought, they settled in a small village at the foot of the dunes, named Merzouga. In spite of those conditions, didn’t silence Tiziri, for instance, it gave a new sense to their songs, a nostalgic feeling to their animals, to their arid thirsty desert and lifestyle, so, another reason to continue playing music.
As they grew up music was a constant in their lives and today each member of the group is proficient in several instruments. 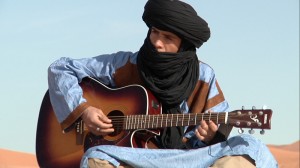 IMODDA was formed in 2007 from the coalescence of two bands, led by Hmad Laarossi (the founder), and Mustapha Ouhaga. Three years later, in October 2010, IMODDA created a charity under the same name, which operates to promote their culture and sustainable development in Merzouga.
Today the group lives in Merzouga, where they work and practice their music. Drawing inspiration from their surroundings they sing about their life, the desert and their people. However, IMODDA’s aim is to not only engage with people from the desert but throughout North Africa and the world.

Starting from very humble roots, IMODDA has worked their way to playing at major festivals and concerts all around Morocco and. Their style, inspired the modern Tuareg music, they invented a new revolutionary and independent desert music style, a fusion of Rock ‘n Roll, Reggae and desert blues, but, of course, remain its authenticity as Amazigh (Berber) music by the use of our local instruments and folk oral traditions as well as particular scales and rhythmic patterns, which include pentatonic music and African rhythms… together all these tunes, tales and songs formed a new style, named “Azur” considered as a sub-gener of desert blues., bridges between their original culture and a modern inspiration.